Select the Components Required to Meet a Network Specification

Before finalizing your network devices, you need to consider the following requirements of your network:

The hubs can only be used to connect network devices they can neither be used to break broadcast domains nor collision domains. So, if you use only hubs in your network then the performance of your network will deteriorate with the increase in network size

A network should be broken into smaller networks on the basis of similarity of requirements of the network users.For example, the users who need to file servers excessively must be put together in the same network segment.

A network with less hops (jumping from one device to another) is always better in performance as compared to a network that has too many hops. The hop counts can be reduced in a network by connecting the servers to the routers. A port on a router can be connected to an 8 port switch or a layer 3 switch to connect servers to routers. The servers directly connecting to routing devices ensure fewer hops and allow the traffic to directly move from clients to servers.

You can connect a router to switches and then connect switches to host computers instead of chaining all the hosts together. Another advantage of switches is that switches spread the traffic to multiple connections and in case of a connection failure the other connections would keep working if connected with each other through cables.

The best network arrangement is one that meets all your company requirements and that has all networking devices connected with each other in a perfect manner.

To practically understand the use of networking devices in a given situation, let us create a small office network with three departments IT, HR, R&D separated into network segments by a router. Each segment internally uses a different network device for the purpose of understanding their usage implications. The details of each network segment are as follows: 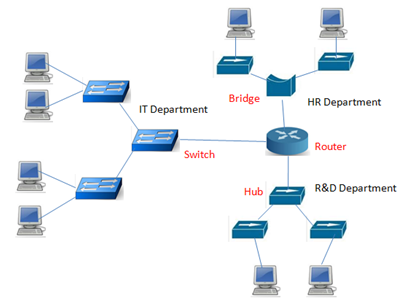 The network design presented here creates three segments with the use of router. The first segment created for the IT department uses switches. We know that each port on the switch creates a separate collision domain but the same broadcast domain. This means that all the computers on the segment will have to listen to all the broadcasts transmitted to the segment, which means the segment has to process a large number of broadcasts, which can cause low bandwidth and high response time for the network. As the number of computers increase in the segment the performance of the segment will deteriorate.

This design is better than the other two designs because the switches placed at the centre of the subnet creates virtual LAN (VLAN), which can manage the broadcast traffic by sending each broadcast to its relevant VLAN only. Segmenting large network into smaller VLANS is cheaper than segmenting your network through routers. The VLANS still require routers for interconnectivity between network segments.

The third segment created for the R&D department uses only hubs, which creates one broadcast domain and one collision domain. The performance of this network segment will be worse of the other two networking segments created on the network.

How many collision domains and broadcast domains are depicted in the Figure above?

How to Claim the Refund / Exchange?

Under What Conditions I can Claim the Guarantee?

Full Refund is valid for any BrainDumps Testing Engine Purchase where user fails the corresponding exam within 30 days from the date of purchase of Exam. Product Exchange is valid for customers who claim guarantee within 90 days from date of purchase. Customer can contact BrainDumps to claim this guarantee and get full refund at support@braindumps.com. Exam failures that occur before the purchasing date are not qualified for claiming guarantee. The refund request should be submitted within 7 days after exam failure.

The money-back-guarantee is not applicable on following cases: